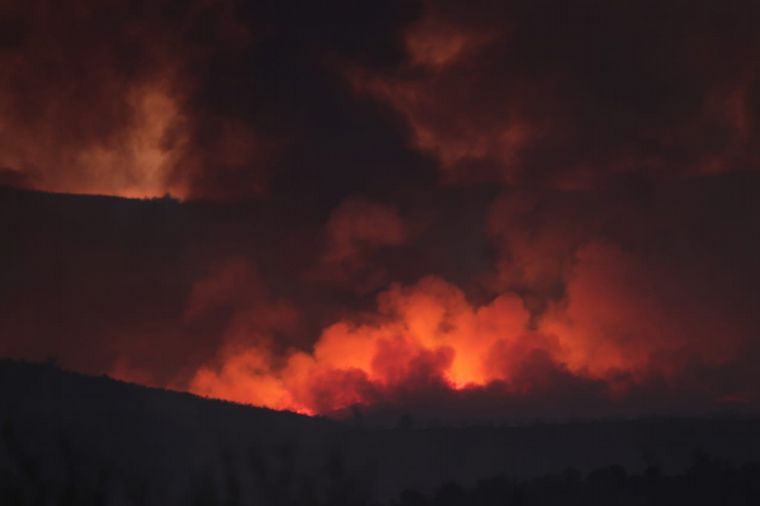 On a day of unfavorable weather conditions due to the temperature rise and the strong north wind, the fight against several fires in the province of Córdoba continued on Tuesday.

At night, the head of the provincial civil defense, Diego Concha Chain 3 that the firefighters managed to contain two fronts -Unquillo and Ámbul-, while those registered in the area of ​​San Antonio de Arredondo and Villa Giardino remain active. 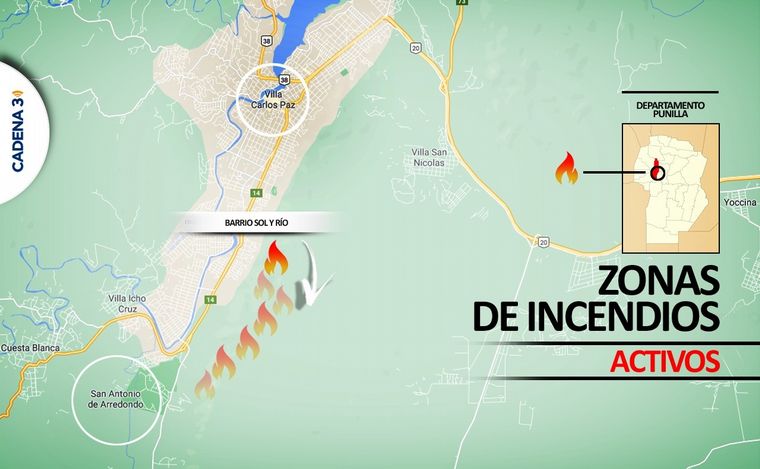 Firefighters are battling the blaze, but the fire does not cease and destroy the mountain in the area between Villa Carlos Paz and the city of San Antonio de Arredondo, in the Punilla Valley of Córdoba.

The troops worked in the area of ​​the Franciscan novitiate and the convent of the Benedictine sisters. Six houses had to be protected, but they were not damaged. The work continues in the sector, he said Chain 3 Diego Concha, Civil Defense.

“The front that went to Las Jarillas is enclosed, but tankers must be placed at dawn to give peace to the city,” 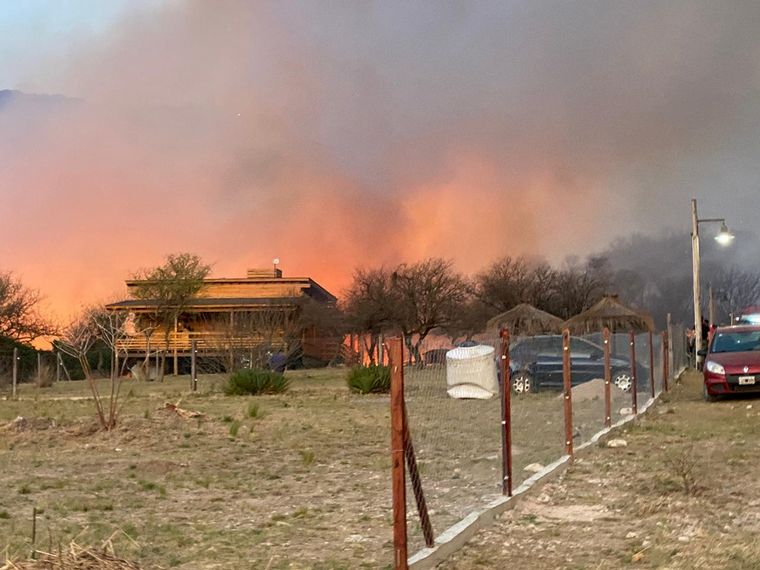 Thanks to the efforts of the troops working on this focus, it was possible to save a wooden house, which was about to reach the fire that came down from the mountain.

Provincial head of risk management in the province, Claudio Vignetta Chain 3: “The fire stopped at the edge of the property. The wind drops down from the mountains. We will have a hard time ”.

In another area on this large magical front in Punilla, the flames affected more than 700 hectares in Estancia El Rosal, in the Falda del Cañete, forcing a family group of six to evacuate themselves.

The person in charge of the place, Miguel Ángel Medina, said Chain 3 who will be on duty to take care of 150 cows and 20 bulls. “Almost the entire field was consumed. If the flames reach the animals, we will lose everything, he said.

In the area, they cut off the E34 route, which communicates with Falda del Carmen, and the E36, which leads to the observatory.

On Monday, 26 people – 21 adults and 5 minors – had been evacuated by the fire that started in the Sol y Río district.

An evacuated neighbor had told Chain 3 who observed a suspicious situation before the flames began: “The dogs barked and then started the fire.” In that sense, justice would have individualized three children between the ages of 10 and 11 who would have started the fire.

Firefighters managed to control the flames in the Unquillo area, according to Diego Concha, head of the province’s civil defense.

At least 40 troops from different regions worked in this sector of the province. 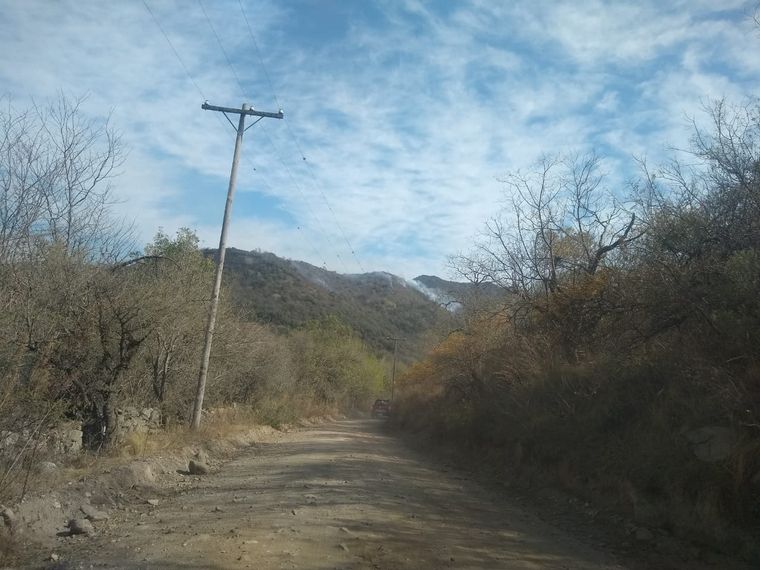 For his part, Pablo Calderón, president of volunteer firefighters at Unquillo, had previously pointed out Chain 3 that the situation is “painful”.

“It hurts us, Unquillenses, because the fire is inside the reserve. At this time, much of the fire is on fire and there is still activity behind Capilla del Buffo, but we believe that if conditions are favorable, we will have it with hydrant planes, he said. 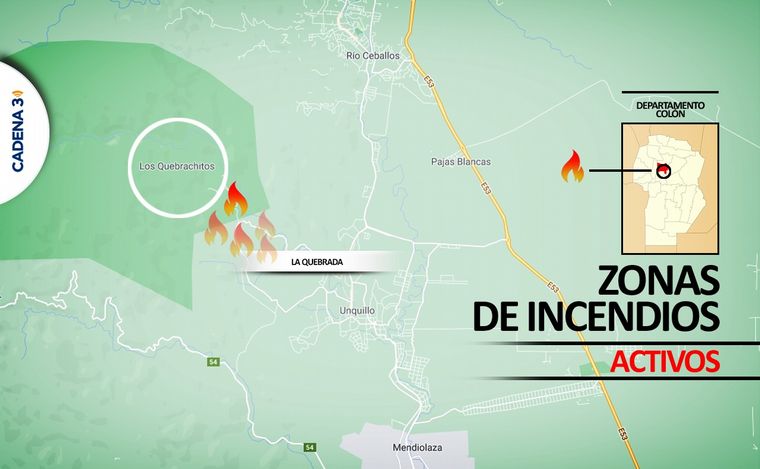 At least 90 firefighters, using four hydrant planes, continue to fight an eruption that broke out this Tuesday morning near Villa Giardino.

The fire chief in the area, Eduardo Molinari, reported that a house was set on fire “because of the gas hose from the pipe that helped burn it.” 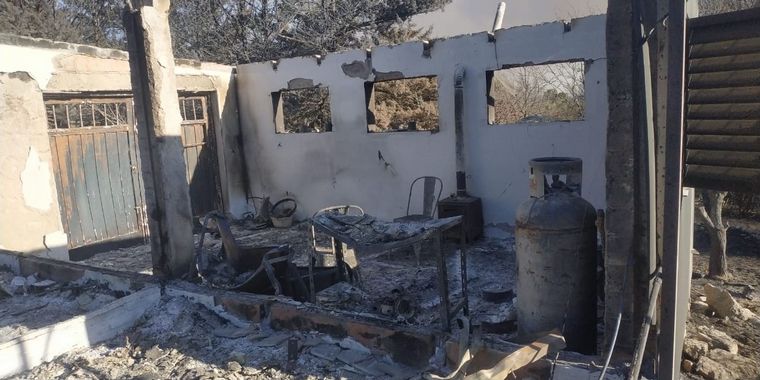 In addition, there was another house that was partially burned, according to Diego Concha, from Civil Defense.

Eight people had to evacuate in the Los Quimbaletes area, but all were able to return to their homes.

In the Traslasierra valley, a fire focus was generated in Ámbul this Tuesday at noon, specifically in the Los Morteritos area, which moved to the city of Panaholma and was controlled at night.

Firefighters from Regional 11 worked on the scene, hydrant planes and six people were evacuated, but then they returned to their homes.

There was also a front, which has now been extinguished, on the Camino a las Altas Cumbres, between La Posta and El Cóndor.

The director of civil defense, Diego Concha, explained that on Tuesday there was only one cash from Cruz del Eje with respiratory problems.

The firefighter was transferred to a hospital in Carlos Paz, where he, after being treated, was discharged.

Neighbors lynched the suspect in the murder of Abigail – Night Shift

Sarasa and budget: Martín Guzmán revealed needs and contradictions to revive the economy