Breaking News
Home / Entertainment / David Copperfield – Once Wealth and Back: Review and trailer for the film – Theatrical releases

David Copperfield – Once Wealth and Back: Review and trailer for the film – Theatrical releases 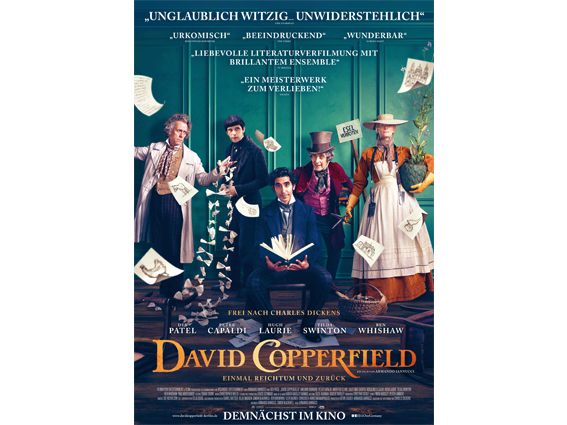 With “David Copperfield”, Charles Dickens wrote a classic of world literature. Now the British director Armando Iannucci presents a new and unconventional new edition that impresses with a big star ensemble. Hugh Laurie shines like a tangled ghost with tangled hair. Tilda Swinton is there with the right eccentric touch, Ben Wishaw makes you shudder and Dev Patel tries like David Copperfield with a lot of verve and optimism to escape misery and poverty.

A classic of world literature that has often appeared on screen: “David Copperfield” by Charles Dickens. Do we really need a film adaptation of the autobiographical novel? If it is so fresh and original, so full of imagination and ingenuity – and implemented in such a versatile way as in “David Copperfield – Once Wealth and Back”, then yes. From Friday at the cinema.

David Copperfield – Once Wealth and Back: Short content in the film

Director Armando Iannucci (“Stalin’s Death”) tells the classic story of a person who, despite all the resistance and class instincts, works his way up from the depths of being, failing, but fighting again. Even 170 years after the novel was published, this is not obsolete.

You just have to fill this well-known and deeply human story with life, as Armando Iannucci manages a featherweight – not least because of a whole group of excellent actors who get to let off steam here with all their aspects.

Hugh Laurie (“Dr. House”) slips into the role of the fascinating Mr. Dick, whose hair is as tangled as his mind, but who also has a great sense of poetry: “My mind is as clear as a soap bubble.” And he knows how to get to the heart of it: “Hey, I’m Mr. Dick. I have a thing for gingerbread.”

Mr. Dick’s eccentric aunt Betsey fits perfectly, a role tailored for Tilda Swinton (“The Dead Don’t Die”). And with his fearless optimism, the lively lead actor Dev Patel seems to have shone straight out of the “Best Exotic Marigold Hotel” into the 19th century. Sometimes his name is Davidson, then Cropwood Trotterfield or Trotwood Copperfield – it’s a long and difficult journey until he finds himself David Copperfield.

For there is the nasty Uriah Heep, who looks like a missing brother to the Three Stooges and is as devilish as Nosferatu. Ben Whishaw, best known as the ingenious tinker Q from the Bond movies, plays him with a devilish presence – he gives people’s evil a deep face.

David Copperfield – Once Wealth and Back: The Critique

Of course, on his rocky path to becoming a writer, David Copperfield is shaken by life, obsessed with misery and poverty, but Iannucci’s “Copperfield” gets an enormous ease thanks to the power of imagination and thanks to the charming, bizarre staff. In social drama, there is no shortage of fun.

Due to the complexity of the novel, the boundaries between the magic of film images and the imagination of David Copperfield, who as a first-person narrator and poet wants to make reality more beautiful, blurred over and over again. An imaginative puzzle game with repeatedly surprising stains.

The most beautiful place in the world suddenly turns into a miniature wonderland when a giant hand turns the proportions upside down. In retrospect, characters turn out to be the author’s imagination and in between, you think you are briefly transported back to the beginning of the silent film. A flight through time and space, through inner and outer worlds, which makes “David Copperfield” a great and imaginative pleasure.

Overview of all playing times

Milan Scala postpones the presentation of the new season

This celebrity couple will replace Wendler and Laura – People