Fake Bullshit review and trailer for the movie in theaters 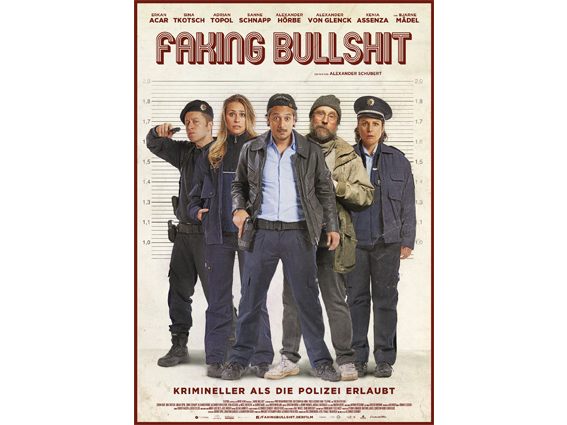 In the German provinces, crime is almost zero. Really good news, but not for police officers Deniz, Rocky, Netti and Hagen. As there is not enough work for the police, their police station must be closed. A disaster that the four do not want to accept so easily. Their plan: If the criminals get away from the small town, they give crime a helping hand.

No crime – actually fantastic. But for the police in a provincial residence, this situation threatens their existence. The officials are therefore trying by all means to stir up their sleepy place, seen in “Faking Bullshit”. From Friday at the cinema

The German “heute-show” is known for its satirical, good-looking and entertaining commentary on current issues. One of the actors is Alexander Schubert, who has appeared there as Albrecht Humboldt since 2010. Now the actor makes his debut as a film director with “Faking Bullshit”, a remake of the Swedish hit film “Kops”.

Police officers Deniz (Erkan Acar), Rocky (Adrian Topol), Netti (Sanne Schnapp) and Hagen (Alexander Hörbe) have problems: there is no crime in their nest. Therefore, investigators are doing everything they can to prevent their provincial office from closing. They stop for nothing and even incite the homeless Klaus (Bjarne Mädel) to commit crime.

A constellation that gives hope for a pleasant evening at the cinema. Unfortunately, the film can not meet these expectations. On the contrary. The work is quite long – a full 103 minutes. Although it will soon become clear how the story will be. Ironically, the woman digging in Deniz at the bar that night turns out to be a police colleague from Düsseldorf the next morning.

Tina (Sina Tkotsch) will prepare for the closure of the office because the officials there are completely underworked. Deniz and his colleagues decide to stir up their contemplative provincial estate and ensure that the crime rate increases enormously. Instead of preventing crime, they become criminals themselves.

The original “Kops” scores points with bizarre, refreshing crazy ideas, situation comedy and wonderfully dry humor. “Faking Bullshit”, on the other hand, seems boring and awkward. Many of the dialogues are irrelevant, the ideas try hard and the humor is mostly flat. The numbers also remain pale and can go no further than stereotypes.

A debate on gender equality is also included. “I do not feel discriminated against as a woman,” says Netti when she is at work with her husband Hagen. “I like to bring you coffee, I also like to wash clothes for the boys. And I do not think it’s so bad if you say Schnuppelmaus to me, I also think it’s beautiful. You do not mean that it is humiliating, right?” Sentences that contribute a little to the discussion and instead happily cement all role clichés.

The fact that women in the film are used as objects of sexual fantasies and the plot is mainly driven by men cracking dirty jokes on top of it does the rest. Is it all irony? Possibly, but it’s not really recognizable and so “Faking Bullshit” joins the series of German comedies whose thigh-striking humor one would have suspected for a long time in the wardrobe.

Overview of all playing times

News from the world: Find where you belong

Paul Heyman on “Today”: “Hell in a Cell Will Be Epic!” wrestling