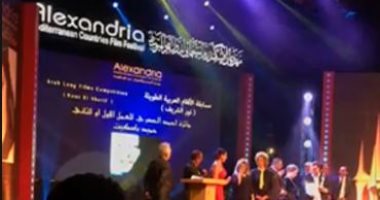 Artist Vivi Abdou released a live broadcast from the Alexandria International Film Festival for the Mediterranean countries on Monday, organizing the festival's closing ceremony today and the distribution of prizes to the participating stars.

The Alexandria Film Festival Competition announced the 34th edition of the festival, named after the great artist Nadia Lotfy, which ends this evening at a major ceremony in Bibliotheca Alexandrina, in the presence of art stars in the Arab world and the Mediterranean countries [1

With regard to the competition prizes, Moroccan director Hamid Basket won the Ahmed Hadary Prize for his first or second job for the film "The Silence of the Butterfly". The Lebanese movie "Shahid" won the Mahmoud Abdel Aziz Award for best artistic achievement. Abboud won the best actor award for a second role for the Lebanese movie "Shahid". The Syrian star Ghassan Massoud won the best actor for his second role in the movie "Writing on the Ice."

The Best Actress Award was awarded by Suzanne Necmettine for her role in the Syrian film "Rose" and Moroccan actress Saida Baadi for her role in Moroccan films "Loula el Rouh" and "Silence of the Butterfly". The best actor for his role in the Tunisian film "Mustafa Zd". Moroccan writer Osman Ashkoura won the best manuscript of Mahfouz Abdel Rahman Award and the best director of Palestine, Rashid Mashhraoui, went to his film "Snowwriting" and the special prize for "Mustafa Zad" Tunisia and the Syrian artist Duraid Lahham's great representation for his role in the movie "Damascus Aleppo" and finally Damascus Aleppo won the best film prize .

The jury in the film competition was awarded the awards. The Spanish film "I & # 39; m in the day" won the best film award by Andrea Juarita. The Croatian Slovenian movie "The Miner" by Hanna Slack won the Special Jury Prize, and Hanna Slak won the Youssef Chahine Award for Best Director for the same film and went to the Naguib Mahfouz Award for Best Manuscript on the Albanian film "A Day of Rest", directed by Gentian Kochi .

Omar Charis Prize for Best Actress by Croatian Artist Janko Popovic Volaric continued for his role in the film "No Blessings" and Spanish actress Ingrid Garcia Johnson won the Faten Hamama Award for Best Actress for his role in "Moroccan Film" Kilikis .. Roundabout "Prize to Jerusalem for Best Artistic Performance, with special mention of interior design and finally Kamal Al-Malakh Award for best first or second work by director, who went to director Genti Kochi for the Albanian movie" Rest Day. " 19659011]]

The competition of the Arab Academy for Science, Technology and Maritime Transport announced the award of four films, among 15 short films recorded by Hatem El Shafei. Nadine Tarek and Hagar Allam, "Integrity Time" and directed by the King of Ibrahim, "The Chance of a Chance "by Basem Muselhi and Omar Khaled .