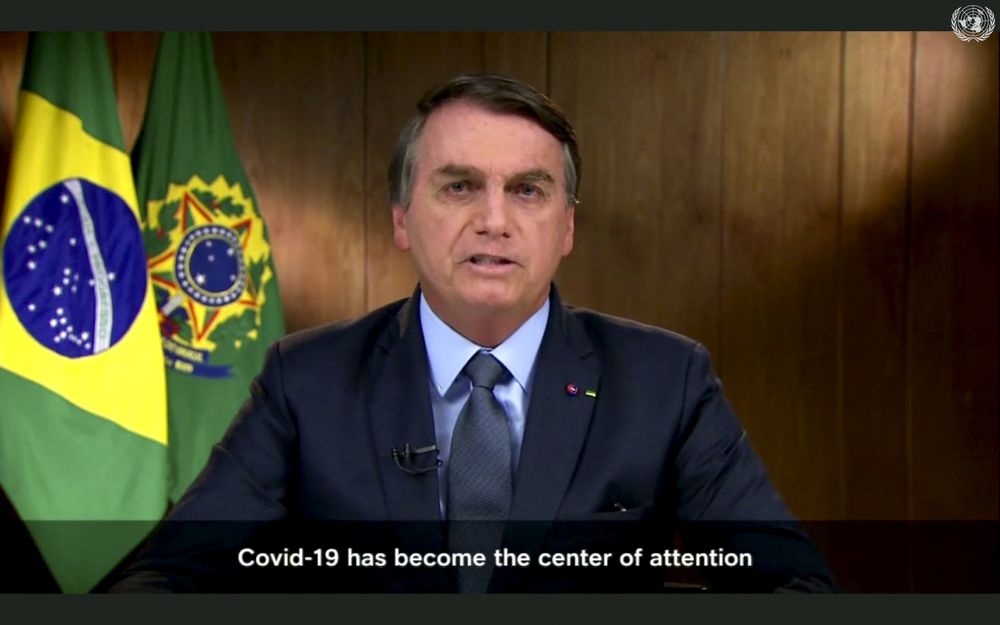 Latin America appeared this Tuesday at the UN General Assembly with unequal approaches and demands that reflect the balances of the region on the international stage and the proximity of the various leaders to the Washington agenda. From the Brazilian Jair Bolsonaro, who took the opportunity to defend himself and accused the press harshly, the Argentine head of state, Alberto Fernández, who began a reflection on the need for future development aid to also benefit the countries̵

7; middle income. On the way through the Colombian Iván Duque, who called on the international community to intensify the diplomatic siege against the Nicolás Maduro regime in Venezuela, whose intervention is scheduled for Wednesday. The region, in short, drew its various aspects and challenges, although this year they are all determined by the common denominator of the coronavirus pandemic.

Bolsonaro inaugurated the assembly this morning, an honor his country has had since 1955, with harsh attacks on the press, which he accused of “spreading panic” among the population during the health crisis. and against the 27 state governors and the federal Supreme Court for dealing with the pandemic. On the fires in the Amazon and the Pantanal, a drama that has Brazil in the international spotlight, Bolsonaro has referred to a “brutal disinformation campaign” supported by “international institutions under dark interests.” And he has confirmed. that the fires are due to indigenous peoples and local people seeking their survival.

In a recorded speech, like all those who followed, the Brazilian has tried to defend himself from criticism for his handling of the coronavirus pandemic, which in Brazil has already cost the lives of 137,000 people. “As has happened in other parts of the world, some of the press has politicized the virus and spread panic among the population under the slogan ‘stay at home and the economy we will see,'” he said.

Bolsonaro stressed that Brazil has contributed “to feed the world” during the pandemic, with respect for “the best environmental legislation on the planet.” He stressed that the country “has never exported so much” and that his government has invested in technology to stop environmental crime. And once again he has attacked his critics, this time for the devastating fires in the Pantanal and the Amazon. “We are the victims of one of the most brutal disinformation campaigns about the Amazon, which is very rich, which explains the support of international institutions for this campaign based on dark interests.” “Our jungle is humid and does not allow fires to spread. The caboclos and indigenous peoples use fire in search of their survival ”.

As for the Pantanal, he has said it suffers from the same problems as California and that the fires are an “inevitable consequence of the high local temperature.” “We are a leader in the conservation of tropical forests, we have the cleanest and most diversified energy matrix in the world. We are responsible for only 3% of CO2 emissions “, stressed the President, who has also confirmed that the Brazilian people are” conservative and Christian “and demand that the international community fight” Christophobia “.

However, his message differs from other representatives of the conservative front in Latin America. Colombian President Iván Duque, another close ally of Trump in the region, called for improved environmental cooperation and the building of a more sustainable world. For the rest, the president took stock of his two years in power, thanking the UN verification mission for its support in implementing the peace agreement with the extinct FARC guerrillas of which he was an ironman. critical.

He also referred to the common threat from drug trafficking, against which he has pointed to a ban. And he included in his speech an “energetic” call on the international community to reject Nicolás Maduro’s “tyranny” in the neighborhood of Venezuela and demand truly free elections instead of “the prefabricated orchestra to which they want to lead the people. Venezuelan” .

The electoral process, which he appreciated, has the sole purpose of “dispelling the dictatorship.” The Venezuelan regime “supports itself with drug trafficking resources, ends up being a terrorist and is a constant threat to democracy in the region and around the world,” the president said, in addition to emphasizing the human rights violations recently confirmed by a UN report itself . “Maduro is a criminal against humanity,” he had said over the weekend during Secretary of State Mike Pompeo’s visit to Bogotá. Duque, in unison with the White House, has been one of the main supporters of Juan Guaidó, the leader of the National Assembly, recognized as president responsible for Venezuela by nearly 60 countries, and promotes a diplomatic siege over Caracas.

Argentine President Alberto Fernández, on the other hand, avoided direct references to third countries. He called for a “multilateralism of solidarity” to combat the pandemic, and the development of a “vaccine against social injustice, environmental degradation, discrimination in all its forms” and emphasized the recent agreement his country reached with private creditors. of its debt in dollars, reports Federico Rivas Molina. “Argentina managed to sign an important agreement with almost all of its private external creditors and became one of the first countries to meet the challenge of facing a debt pandemic debt restructuring,” he said.

Argentina now urgently needs new dollars to maintain its economy. Without the possibility of external credit and at the beginning of a negotiation on the restructuring of its debt with the IMF, he asked to open international development aid to middle-income countries like his. “In this stormy global context, toxic and irresponsible external indebtedness for speculative purposes is another wave of backwardness and underdevelopment (…) No country can pay its debt at the expense of leaving its people without health, without education, without security or without capacity to grow, says Fernández.